Available to applicants enrolled or intending to enrol in Year 1 of the Agriculture Program. 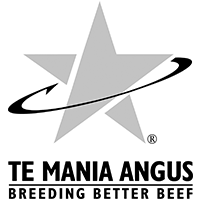 The Te Mania Angus herd is comprised of 1700 stud Angus females and 300 recipient females. The herd is run under commercial conditions, with a focus on sound, highly fertile and docile cattle. Genetic focus is applied to calving ease, growth, carcase quality and structure, while constant research is undertaken to maximise efficiencies. Recent on-farm research has involved monitoring heifer puberty and net feed intake.

Team Te Mania is an extensive progeny test and marketing alliance. This program, established in 1995, is unique for its kind in the industry and uses Te Mania Angus genetics exclusively across over 40 commercial herds in New South Wales, Victoria and South Australia. Feedback and analysis of data from these herds increase the accuracy and predictability of Te Mania Angus genetics and provides the leverage for those producers to share a highly regarded and recognised genetic brand. Strong relationships, the depth and accuracy of the genetic information and sharing the brand enables Te Mania Angus clients to more accurately target lucrative markets.

Biological fertilisers, farm layout and grazing systems are planned for maximum growth and to ensure the land is improved for generations to come. Technologies which collect objective data for analysis are key to genetic advancement. The data collected includes fertility, structure, weight, carcass, docility and feed conversion, along with information collected beyond the farm gate, from feedlots and processors

In 1980, the first-ever on-farm embryo transfer program was carried out at Te Mania Angus. It has been used every year since that time, to accelerate genetic gain by multiplying the highest performing bloodlines. Te Mania Angus is managed by Tom and Lucy Gubbins at Mortlake in Western Victoria and Hamish and Amanda McFarlane at Connewarre near Geelong.

Family members have defined roles, and sit on the Board chaired by an independent Director. Boardroom strategy focusses on livestock, finance, marketing, research and client feedback, with emphasis on being sustainable and profitable throughout the entire beef chain.

In approximately 500 words describe what you see as the major challenges facing the Australian cattle industry over the next five to ten years, with a perspective of both local and global issues.